I’ve recently been asked by several people how I go about buying decks on the secondary market, and I’d like to let you in on my strategy.

There are many places where you can buy second hand decks, and while they all have their merits, I’m going to focus on decksofkeyforge. The reason is first and foremost the great filtering system. I’m assuming you’re not looking to spend a huge amount of time going over every single deck and want a way to narrow it down. As of the writing of this post there are 6200 decks with SaS 70 or higher listed for sale. If you spend about 30 seconds reviewing a deck, you’d have to spend 50 hours on it, and that’s not counting the constant supply of new decks, the fact competitive decks can have lower than 70 SaS and the need to test some of those decks.

My second assumption is that you’re not swimming in cash, if you are, then simply stating what you’re looking for in the buy/sell/trade group on facebook will likely get you a few select decks with outrageous price tags really fast.

I’m also writing this with the assumption that you’re looking for a competitive deck. Something that can day 2 a vault tour at a consistent rate (depending on the pilot, of course). It is very hard to say what deck could win a vault, but making day 2 is a good metric for measuring a deck’s reliability.

Composition of a Gem

Before we look into how to filter out results, we’ll need to define what we’re looking for. When I look for decks to buy, I look for decks that are more than “a bunch of good stuff”. SaS score is a pretty good metric for good stuff, and so if you were looking for just that, you could go ahead and look over everything by SaS from the top, and pay a premium for it.

When I look for a deck I want to find the stuff SaS overlooks. Decks that work because of card interactions that are more than the sum of their parts. SaS doesn’t account for card synergies between more than two cards, so such card combos can be a good place to start. 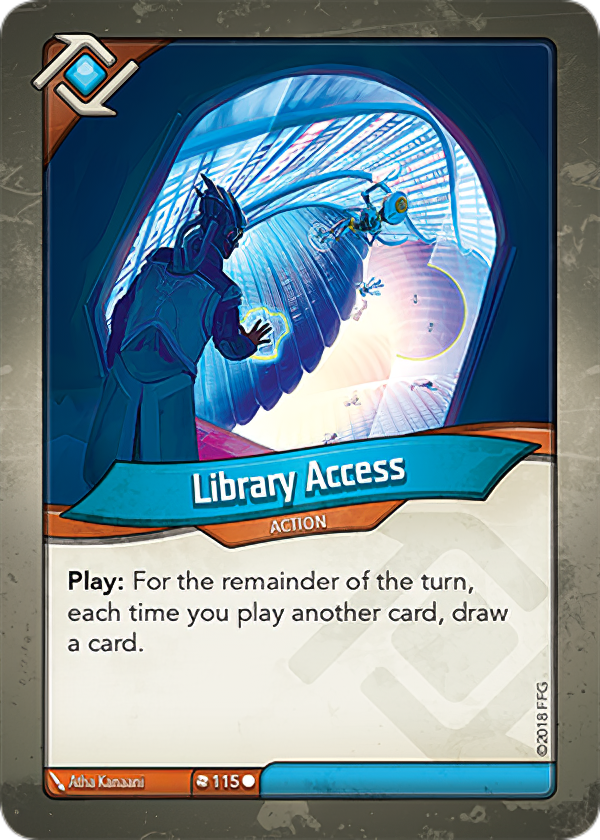 Let’s look at a personal favorite of mine. Library Access. On it’s own, Library Access doesn’t do that much. If you start with LA and 3 other Logos cards in hand, you’re going to draw 3 cards, which is likely to net you 1 more Logos card on average, which might hit yet another card, but that’s about it. But when you pair Library Access with other cards such as Wild Wormhole and Timetraveller and Help from Future Self, you get something more. When you play those cards during a Library Access turn you are increasing your hand size. If you go LA + HFFS + TT + WW you have: Drawn 6 cards and played one random card. That means that if you started the turn with 6 cards, you now have 9 (6 minus LA, minus HFFS + 6 minus WW). You can keep playing all the Logos cards and end up with 9 cards of two houses, likely resulting in your next turn being quite explosive. And that’s just the tip of the iceberg.

This is also a big play the deck can do, and while you don’t need a big play in your deck, it’s nice to have, so when it goes well, you get a big edge. It’s important to note that some decks need to lean into their big play while others just enjoy it if it happens. But that’s a topic for another article.

What makes a deck appealing can vary from deck to deck or person to person. When I consider decks for competitive play, I like to note the appeal. It can be anything from the abstract such as “Sticky board” or “Lots of Æmber control” to specific cards such as “Quad Stealth mode” or “double Punctuated Equilibrium”. The X-Factor is what makes the deck interesting, unique and probably fun to play. Identifying X-Factor is not easy, and many times I look over a deck in a search and pass on it, only for it to later show up in a different search and suddenly it is much more appealing.

Identifying potential X-Factors you might want to look for is also not easy. It can come from playing a lot and seeing things in opponent’s decks, or from thinking about the game and which cards and combos you like or think are strong.

I no longer filter based on stats because it is too easy to miss good things that fall outside of the parameters, but I still quickly glance over the AERC scores in order to get a quick assessment of what the deck does. If it’s outside of the usual parameters, I like to hover over the stat to see the breakdown and assess if it’s good enough. For example, many Æmber control cards such as Effervescent Principle, Doorstep to Heaven and Too much to Protect all have AERC values between 1-3, but one of those and a couple other small effects can be sufficient. Still, let’s look at what kind of scores make me comfortable.

Aember control – I like to see 8-12. This range usually means I can keep in the game easily enough to develop my plan.

Creature Control – 10+. While sometimes high scores mean redundancy, like 4 Savage Clashes, usually it indicates I can stop a board from sticking too hard.

Expected Æmber – I don’t care. Back in CotA rush days, Expected Æmber was all the rage, these days, a sticky board can reap out for the win. I no longer look at this score.

Efficiency – The more the merrier. While I don’t have some kind of minimum, I do like to have at least 5 and preferably around 10. This is largely just my playstyle though, and many control decks can have low Efficiency.

Disruption – Largely a playstyle preference, if you want a disruptive deck though, I haven’t felt like Disruption is a good enough metric. Fogbank is very Disruptive, but it gives Creature Protection and not Disruption. Skippy Timehog gives Other, and is one of the most disruptive cards in the game.

So we know what we’re looking for, it is time to plug in the filters and get looking. I generally like my search result to produce 10-20 decks. I don’t want to look over 100 decks, it’s very time consuming. I usually start by plugging in some combination of cards I want. Let’s say Library Access and Timetraveller. At the time of this writing, it produces 114 decks for sale, a bit much to go through, so I can add some other filters. I could set the Aember control to a minimum of 8. That reduces it to 44 decks. I like a little consistency in my combos, so maybe I should look for some archiving options.

Price is a big factor in my searches. Often the top result is a high SaS deck with a huge price tag. This is not what I’m looking for, and there are a number of ways around it.

Using a SaS constraint can produce good results if you’re looking for a common combination of cards. There are two options here. Set the maximum to about 75, the point where deck prices usually drop to $50 and become more affordable (or lower, if you’re looking for the true bargains). Or, you can set a minimum of say 60 or 65, and sort the decks in ascending order and stop looking when the prices become too high. Both options work nicely and I recommend you give them a go if your search ever produces too many results.

A lot of decks posted have no price, or a high price trying to fish high offers. I’m guilty of having decks posted this way too. The problem here is it is extremely inefficient to buy decks this way, unless you’re just trying to get a fancy combo and don’t really care how the deck plays.

My next step after finding a deck is testing, but if the price isn’t listed, then I can’t know if it is within my budget, or within the scope of what I’m looking to spend on such a deck. Then if I spend time testing and find out my offer was rejected, I lost a bunch of time testing a deck I can’t buy. This is not to say I never make offers. Sometimes I make an offer based on the rarity of the cards, and something I am willing to pay to get a neat combo even if it’s not the most amazing deck out there. I usually have to play at least a couple of games anyway, before making such an offer. But if it’s a rare enough combination of cards, it’s worth it.

I highly recommend listening the BDQ podcast episode on testing efficiently. To summarize, when testing a deck you don’t need to play the game to completion, just see if the deck does what you want it to do. Whether you win or lose also has little bearing, since that might be due to lack of experience or luck. Test the deck to see if it feels good.

I also started maintaining a spreadsheet of my reject decks and my reasons, you can find it here.

I’m still running a double elimination bracket low sas tournament on Thursdays. So join the discord and find the #timeshapers channel to join in on the fun. I also started running 8 player Archon Solo pods since there are a number of Archon Solo events coming up, such as the Glorious You, which you can also find on the Sanctumonius Discord.

We’ve also started the Timeshapers Podcast, so find it on your favourite platform, and if it isn’t there, please leave a comment so we can get it on there.