Discarding creatures to the Quixxle gods

Some board states or cards may cause you to choose to discard a creature rather than play it. I already covered one such situation in my article about soft locks. There are more situations that may merit discarding a creature, and some Worlds Collide cards spring to mind: Quixxle Stone, Fangtooth Cavern, Red Alert and Unnatural Selection. 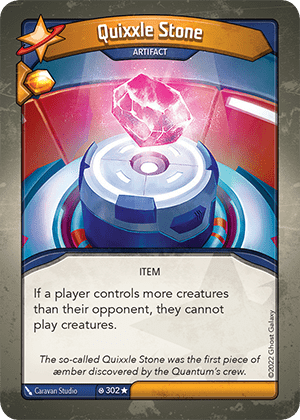 Quixxle stone is undoubtedly one of the most game warping artifacts in the game, and forces you to evaluate whether you actually need a creature in play, rather than just play everything you have in hand. There are a few things to consider when deciding whether to play a creature under Quixxle Stone.

Is this creature better than the average creature in your deck?

Since you’re going to be forced to discard creatures, a good measure to whether you want to play a creature or not is if it is just one of the better ones. A Mother will likely hit the board any chance it gets, while a Knoxx will likely never be played. Extreme cases are easy to assess, but what about more nuanced cards? Is a Yantzee Gang worth playing? What about a Borr Nit?

A good measure would be to simply compare it to the other creatures in your deck. Is it better than at least half of them? You’ll likely want to play it.

When facing Quixxle Stone In Archon, you might not be able to get more than two creatures on the board, and even that may be considered lucky. In Sealed you may be able to get three or four as your opponent is more likely to want some creatures too.

When choosing which creatures to play, it is important to think of House Distribution. Do you want to have as many creatures of a single house, or single creatures from several houses. It boils down to how your deck runs. If it is a Star Alliance deck with lots of house cheating, you might choose to have all your creatures from Star Alliance. While if your deck wants to simply cycle fast, you probably care less about which houses they are from.

When playing a creature it is important to assess the long term value of the creature. Something like an Eyegor is usually a card you’re extremely happy to see, but under Quixxle stone it has a cost of not being able to play another creature. Something with a strong Reap effect like A Quant, might be a better play.

It is obviously hard to say how much removal your opponent has in Sealed, but if you’re playing Archon you’d like to play creatures that can stick to the board once you get them. Since you play fewer creatures, your opponent’s limited supply of removal is going to be much more effective in keeping your board size down. Warding will go a long way, but a Medic Ingram on her own isn’t going to do much. 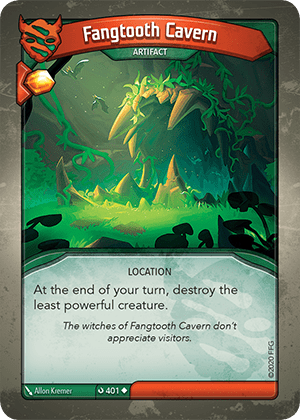 I played a few games with Rick from Help from future Self, and he piloted a deck with two Fangtooth Caverns. This situation really got me thinking about choosing which creatures to play and when, and is what inspired this article.

When Rick opened with a Fangtooth Cavern, and I had a Lieutenant Khrkhar and a Sensor Chief Garcia in hand, I chose to play KhrKhar but discard Garcia. My reasoning was that the three power of Garcia essentially enables my opponent to play a three power creature and still hit mine with Fangtooh. Playing KhrKhar on the other hand, means that my opponent would need to either kill one of their own creatures with power four or lower, not play creatures, or play a five or higher creature. By discarding Garcia I limited my opponent’s options.

In retrospect, it is possible I should have discarded both, since the long term value of KhrKhar is low, and allowing my opponent to play a five power creature may be detrimental. 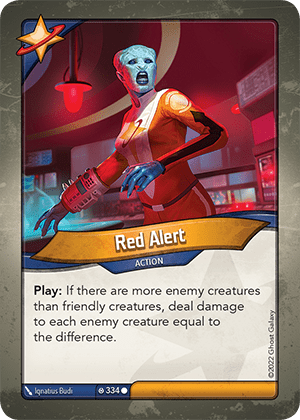 Playing around Red Alert is tough and not always worth it, but sometimes making the decision to discard a creature can save your board. Unlike Quixxle stone, I wouldn’t discard any creature that is below average for my deck, but I might consider discarding a creature if it has very low impact, and ups the damage my board will take to a point where a Red Alert easily clears half or more of it.

This is even tougher to do in Sealed, where you can’t know for sure your opponent has a Red Alert in their deck, but it is something worth keeping in mind. Similar to Too much to Protect, I try to only play around it if doing so will not cost me much, and not doing so when they have it will cost me the game. 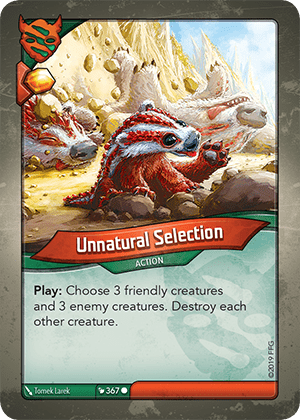 Each creature you play over the third one essentially kills another of your best creatures. How good is your best creature and how much better is it than the one you want to play would be a good guide to playing around Unnatural Selection. If you have a monstrous Tribune Pompitus on the board, you might want to keep your board small if your opponent is packing Unnatural Selection.

As with Red Alert, this assessment is much tougher to do in sealed, and I doubt it is worth doing unless it can outright win you the game or lose it if you don’t, but definitely something to keep in mind.

Hope this article proves useful to you when deciding how to play against these cards, or other situations.

We’ve also started the Timeshapers Podcast, so find it on your favourite platform, and if it isn’t there, please leave a comment so we can get it on there.