This is the second article in a series, if you have not read the previous article, I strongly suggest you do so. In case you haven’t and decide not to, the general premise is that I found 20 decks in a ~150 deck collection I feel are worthy of testing for competitive play, I ranked them, and will start by trying out the first 10 to see if I can find a good Archon Solo deck and a Survival/Triad lineup.

This time I’m going to test my top 3 decks based on the ranking I described in the previous article and see how they fare against random player on thecrucible.online.

If you haven’t done so, I recommend BDQ Podcast’s episode on Testing Efficiently. They outline a method of testing decks quickly, which can be summarized with the idea you don’t need to finish every game, you just need to see if the deck does what it needs to do.

For this method, though, you’ll need friends to test with that are in the same mindset, and it is much preferred to do so offline rather than on the crucible online. Since not everyone has that accessibility, and it’s sort of rude to just scoop against people online just wanting to have a good game, I’ll do what you might do, and just play the games out.

But the premise that a deck needs to do what you want it to do is very sound, and so before playtesting, I will assess the deck and figure out what I want it to do. Then, I will play it and note if it did what I wanted it to do, and put more stock in that than win/loss record. 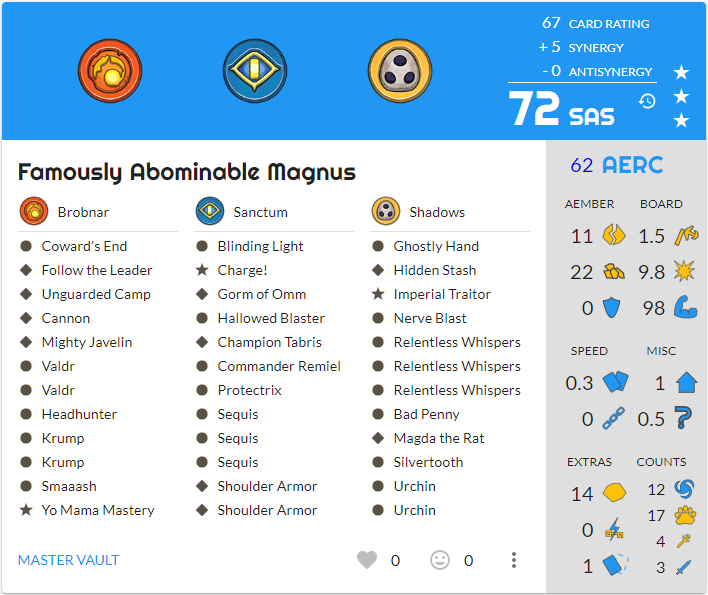 The deck with the overall highest rank among the parameters I chose to rank. Here they are:

Æmber Control 2 – I set this at 2 because of the high number of cards that can do Æmber control, and the fact it exists in all 3 houses.
Expected Æmber 1 – the 22 by DoK seems fairly accurate, which is above average.
Creatures 1 – The creature count isn’t very high, but they can hold a board, and the distribution is pretty good, allowing to call the same house to reap.
Creature Control 1 – With various ways to kill small things and a Coward’s End to kill big boards, I feel I can handle most boards I’ll face.
Artifact Control 1 – One hard artifact control is good but not amazing.
Dead Cards 1 – I think this may  have been a bit a typo, and it should have been a -1. The Bad Penny is fairly useless aside from taking the odd Relentless Whispers and there are some other situational cards such as Cannon, Yo Mama Mastery and the Shoulder Armors.
Combo Potential 1 – No idea what I was thinking here, there is obviously no combo potential.
Disruption 0 – Nothing really stopping my opponent from doing things.
Affinity 1 – The fact it has 72 SAS makes me want to play it and prove they can be viable.
Total 8 – Should have been a 5.

Game plan:
It seems to me like it’s an Æmber Control deck, that wants to hold the board. It’s missing a Doorstep to heaven to really shine though, but let’s see how it does. On to the Crucible!

I have a bit of a hard time holding the board, but eventually three Sequises stick, and I win in conjunction with the steal in shadows. I feel like my draws were pretty good, and I can see that getting them in a different order may not work as well.

I make a few silly misplays and one misclick that was detrimental, I lose, but I feel the deck did it’s job.

My opponent leaves when I’m checked for third key. I managed to hold board well and control Æmber. I might have had some trouble against their Arise! if it happened earlier.

I feel after three games I have a fair understanding of what it does. I’m not overly excited about it, but it’s a solid choice. I personally prefer decks that allow more interesting lines of play and this deck is fairly linear.

I’m also finding that the dead cards are a not a bother, other than the Hallowed Blaster, as I played Bad Penny a few times for the potential extra reap or fight and it worked out well, since my deck holds a board.

I’m marking this one as a maybe, mostly due to playstyle.

Æmber Control 1 – Decent amount, with some strong cards.
Expected Æmber 1 – The DoK stat is a bit low, but I have it a 1 for the Speed Sigil.
Creatures 1 – Really solid board with some threatening creatures and ways to protect them.
Creature Control 1 – Spirit’s way is excellent board clear and some targeted removal helps.
Artifact Control 1 – Double Nexus would generally just get a 0, but because of Speed Sigil I upped it to 1.
Dead Cards 0 – Has a couple of highly situational cards, but not too many.
Combo Potential 0 – Aside from Speed Sigil just making things faster, I can’t do anything crazy.
Disruption 1 – Lots of annoying Dis Creatures.
Affinity 1 – I just love the idea of triple Tocsin with Speed Sigil.
Total 7 – After revisiting the numbers on the previous deck, this is the highest ranked one.

Game plan:
The Speed Sigil makes me want this to be a rush deck but it probably isn’t, and may actually be discarded in some cases. But what this deck really wants to accomplish is high level of disruption.

I get early board and their lack of board clear means I control most of the game. Still, they are pretty speedy and I feel my Æmber Control is a bit lacking. Overall though, I feel this deck does what it wants to do well.

I lost, but look at this board, it’s out of this world. I will need to learn to play this deck to be effective with it. Creature placement matters a lot. 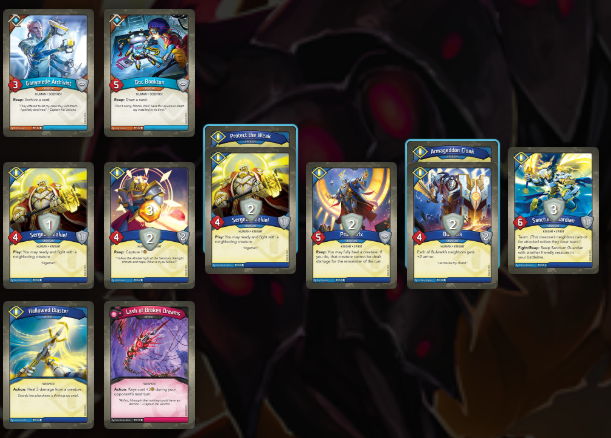 I do wish it had a Francus or a Champion Tarbis.

This game really brings out the disruption of the deck, discarding lots of cards and keeping Succubus and Tocsin on the board for a long time. Surprisingly, I didn’t get much Sanctum out. Sanctum may actually be the weak point of the deck, and I just want it out to protect my other houses and not reap for 6. Could depend on what I’m playing against.

This deck has a bit of a weak spot in Sanctum, while it holds the board extremely well, it doesn’t do enough more than that. The deck has high potential for control, but I’m not a practiced control player, and as such I may not be the ideal pilot for it.

I’m marking this as another maybe due to playstyle considerations.

Æmber Control 2 – When it’s in all three houses, it’s usually a good sign.
Expected Æmber 1 – The DoK stat is a bit low, but I have it a 1 for the Speed Sigil.
Creatures 1 – Big board creatures and some good ones with Speed Sigil.
Creature Control 1 – Not a lot of targeted removal but Speed Sigil, 2 Ganger Chieftain and 2 Anger will allow the Brobnar to hit things fast.
Artifact Control 0 – No hard artifact control, but Nexus Speed Sigil and Whispering Reliquary is pretty good.
Dead Cards 1 – Just Pingle who Annoys? Dunno, looks good.
Combo Potential 0 – It doesn’t have any.
Disruption 0 – Nope.
Affinity 0 – It looks solid, but I’m not terribly excited to play it.
Total 6 – A solid 6, let’s see how it does.

Game plan:
Like the previous deck The Speed Sigil makes me want this to be a rush deck but it doesn’t do that, unlike the previous deck this one doesn’t have any disruption but has better Æmber Control, so I’m thinking hold board and reap while stopping my opponent from forging.

As soon as I draw my Cleansing Wave, I notice some potential combos with Hebe the Huge and Pingle who Annoys. Unfortunately, I didn’t pull it off. Playing Speed Sigil was probably a mistake and likely cost me the game. I’m not feeling much of a cohesive game plan, but I’ll keep going and see if one pops up.

I won handily three keys to one, but that doesn’t matter because I still can’t find a cohesive game plan. The best I managed was to capture some Æmber, wait for them to take it back and then Doorstep to Heaven to make it vanish. But that plan was hugely helped by my Nexus using their Skeleton Key to capture more. I’ll give it one more go, but I’m leaning towards a no.

The game plan is starting to feel more cohesive. The idea is to do your best to make as much of your opponent’s Æmber vanish, but the deck really needs some more lose effects to make that a viable strategy.

It’s an interesting deck and with enough plays I might be able to make it work, but I don’t feel confident I can win games with this in a Vault Tour. If it had another Doorstep to Heaven, or maybe Wardrummer Bumpsy or even some proper steal in shadows, I could see it working well.

As it stands I’m marking this a no, it’s just not good enough.

It quite surprised me I managed to get a good feel for the deck after only just 3 games. I think the main contributing factor to this is the advice from BDQ Podcast’s episode on Testing Efficiently. I didn’t care about winning and didn’t put weight in that, which allowed me to more clearly see what the deck does.

I’m not sure the ranking system I devised is working, as none of the three decks really hit home, I may have to revise it. I’m wondering if it’s really just a playstyle mismatch, in which case, the ranking is completely fine just maybe need to give a bigger weight to Affinity.

This was a pretty quick and fun exercise, and I’m looking forward to doing more.