I’ve found that a lot of players with larger collections struggle to find the best decks in their collection. I decided to do an exercise in deck selection from a collection of ~150 decks, and see if I can find an adequate process to do so in a reasonable amount of time.

Some of those methods can also be used to find decks on the secondary market, so it could be of use to you even if you don’t own a large collection.

I copied someone’s collection to a new decks of keyforge account so the collection will remain constant for you readers and you’ll be able to follow along. So here is the timeshapers collection. Just to be clear, I don’t own any of those decks, but they should represent a collection you can find in the wild as it is an actual collection someone owns.

This will be the first of at least two, maybe three articles to complete the process.

I want to be able to find a deck for solo archon, and 3 decks for survival/triad archon. The solo archon will probably be included in the 3, but I’m not assuming anything at this point, so find 3-4 competitive decks in a collection.

I also want to do so in a reasonable amount of time, so I think that after 50-70 games on the crucible I should know which decks I want to play, so they can be practiced thoroughly.

I will do a search of the collection using various variables that I come up with. This will produce a list of decks that merit a closer look. After that, provided I find more than 10 decks, I will cut it down to 10.

Playing 5 games against random opponents on the crucible with each deck of the 10 should give me a good enough picture of which decks I want to test further. After which I will ask the good people at Sanctumonious discord server to help me test against some known day 2 vault tour decks.

Finally, I will choose a deck to play as Solo Archon, and 3 to play for Survival/Triad. I will not to the reps in, as that is not the point, but if you would do this for your own collection, the next step would be to play each deck 50-100 times.

Also note, I have never played any of those decks, which is not a common situation. This process however might allow you to look at your collection with fresh eyes. Naturally there will not be much need to play your known decks in the beginning of the process, but testing against known vault level decks is a good idea.

Some parameters I search for are biased by my own preference when it comes to keyforge, I encourage you to find some of your own search parameters. These searches are also useful for the secondary market, and I go through a similar process when looking for decks to buy.

On decks of keyforge you can’t sort by things like bonus Æmber. I’m told this is a performance issue. But you can sort decks already loaded in your browser. Make sure all decks are loaded by scrolling down, then click the rightmost view type. Now you can click on the top of the table to sort the loaded decks based on various AERC parameters.

Bonus/Raw Æmber – The top 5 decks have 17+ Æmber. I had to eliminate 4 of them for lack of Æmber control and was left with Der feurige „Luchs“ Eric.

Card Draw – In retrospect, not the best filter, but looking at the top 3 decks, I still found 2 I liked. One just didn’t do card draw in a way that mattered. Der gutmütige „Drachenblut“ Grimbert and Die schlaue Designerin J. added to the list.

Expected Æmber – Decks with 27 or more are usually very fast. Two of those already showed up in the Raw Æmber category. The Quad Hunting Witch looks fun, but I suspect the low Æmber Control will hurt, I’ll add it anyway. The other looks very interesting with a Legacy Speed Sigil.
Viktor „Das unerfahrene Glutnest“ and Stillyll, Spawn of Rhodchilla join the party.

High Æmber Control – Proves to be ineffective for this collection as there are just too many of them.

Efficiency – Initially looked at house cheating, but that only counts using and not playing, which I care less about.

Arise! Hecatomb looks fun, and the Logos looks speedy in Myra, Schurkin der mittellosen Mauer.
The high efficiency makes me want to test Aki, Priesterin des Ufers, even though my cursory glance says it’s not very good.
The Triple Exhume deck that shows up doesn’t excite me for lack of good targets.

Next I search the collection for high impact cards, or ones I personally like to play with.

Grump Buggy or Martian Generosity – Nothing interesting shows up. 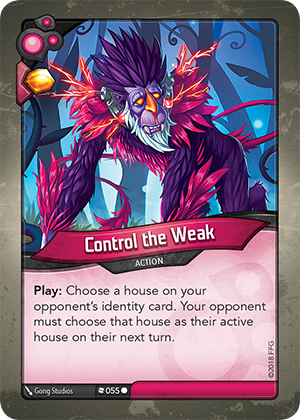 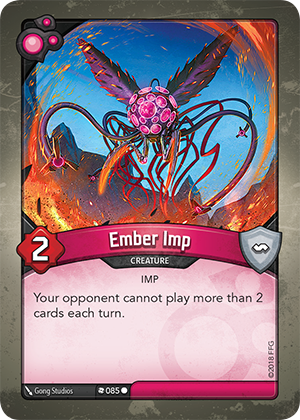 Two decks with low Æmber Control are a pass, but this one looks good:The Sgt. of Vineopolis especially with the double Ember Imp hiding behind a Shadow Self. 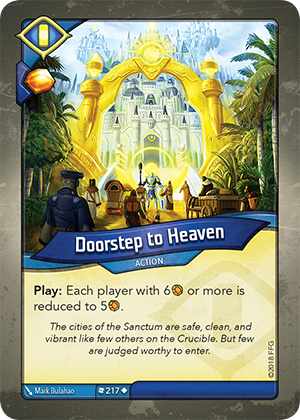 Doorstep to Heaven – A good card against the current rush meta.
Glänzender Höfling R. Doesn’t look very good, but could be so much fun to play. I’ll add it just in case I don’t find enough good decks.

This one will also fit a later search for Speed Sigil, and looks strong Samson, Handlanger der glühenden Bar.

Edelfrau Ortiz von den Kavernen has some of my favourite cards, chaos portal, teliga and the maverick inspiration is interesting.
The other is already on the list from high Efficiency.

Triple Urchin – Which turns out to also include Faygin in all cases. Nothing too much to say about them, so just add all three to the list:
Die egoistische Infiltratorin F.
N. O. Helshank of the Warded Cave
Gilda „Die pelzige Spielerin“

Speed Sigil – Well, that’s a surprise, there are 22 decks with Speed sigil in this collection, definitely unusual, but I’m not complaining. At least they are not all enticing. 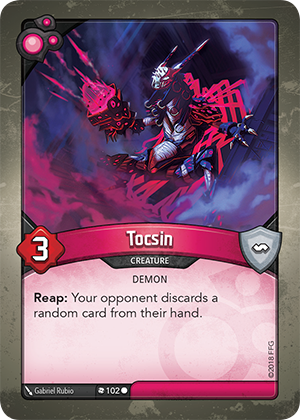 I love how the Speed Sigil will turn those Tocsins into Mind Barbs with a body: Weiser „Narr“ Degenhardt

And lastly I made a quick pass with minimum Æmber Control of 8 and a minimum Expected Æmber of 20. which is the general minimum I feel works for vault level decks without having special stuff like high efficiency, grump buggy, etc, which I already looked over. Most of the ones that are interesting are already on the list, but I do find: Famously Abominable Magnus

Now to curate the list down to a manageable 10, so I can get a good idea of how they play in 50 games. I’ll keep the other 10 in case those 10 don’t pan out, but that is very doubtful, as the list of decks I found looks very solid.

I’m going to do a bit of deeper analysis of the decks, the same way I do for sealed. Creatures, Æmber pips, Æmber Control, then Creature Control, Artifact Control and Dead Cards. With a special category of combo potential. This is archon, so I’m not counting power cards as we expect to have plenty.

Instead of flat out counting them, I will rank them:
-2 terrible
-1 bad
0 average
+1 good
+2 amazing.
Combo Potential will be 0-2 score.
Then total the score.

For example, 2 dead cards is fairly standard, so that will give a deck a 0. While no dead cards will be a 1. To get a 2, a deck will need to have a fairly completely list of high impact non-situational cards.

When I reached The Sgt. of Vineopolis I identified the need for Disruption parameter, ranked 0-2 like Combo Potential.

When I reached Glänzender Höfling R. I identified the need for an Affinity parameter, denoting how much I like the deck and want to play it, I set it at 0-2 but never set a 2.

I used a google spreadsheet for this that you can view directly here. But for convenience, here is a screen capture of it  sorted by rank.

Do note this is my first time doing this, so I was not entirely consistent with my scoring. But it helped narrow it down to 11 decks with 4 or higher, which is good enough for me.

After writing this, I had another idea of how to look through a collection, which produced an article An addendum to collection curation.

This took me about two hours to do, which is a fair amount of time. I realize I’d like to do more of these in the future, and likewise other experiments that take a lot of time. As such, I’m thinking of opening a Patreon to support this venture, and also move the website off wordpress so you don’t have to suffer the intrusive ads. Would love feedback on this proposition.

Next time I’ll write about how my testing went, how long it took, and anything I learned in the process.