So I decided to do another pick a deck practice, and I open the first three decks on the master vault to get 3 random decks. Well, the first deck I look at is Sire “Felon” Popens. 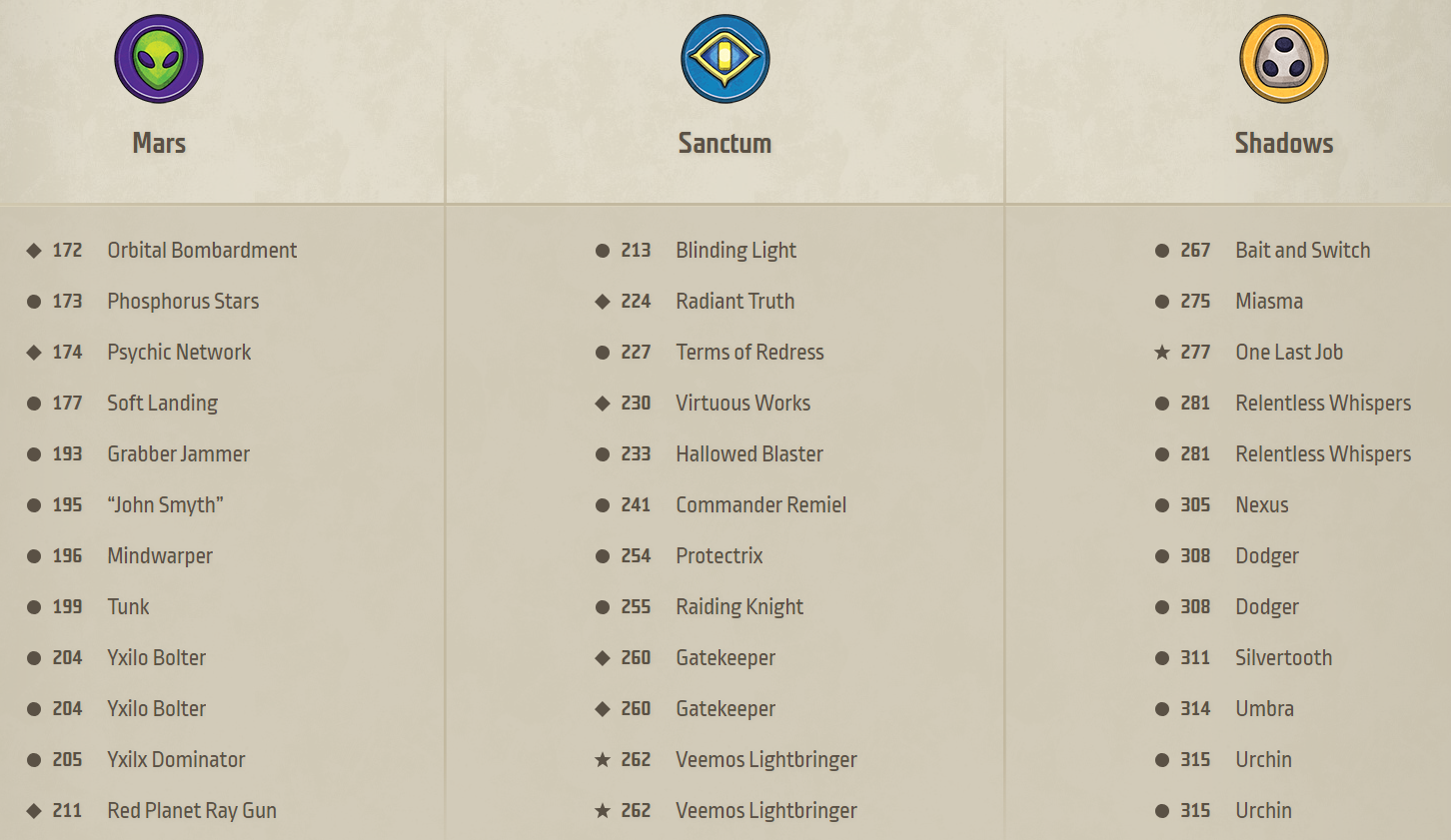 Wow. I mean, just look at that deck. I’d take that to an Archon vault tour. Well, maybe I’m exaggerating a little, but seriously, if I open a deck of this quality I’d be very happy. It has everything I want. Aember control, some soft board control, good creatures, even artifact control.

The other two decks are decent too. Quillon S. Heartwar, the Second has some decent burst, aember control and utility. And Mentore della Curiosità R. Graxul has likewise pretty great shadows, but replaces board presence and some aember control for aember burst. In a sealed environment, I’d take the aember control.

I can tell you that my analysis has become a lot more intuitive than by the numbers. I get a much quicker grasp of a deck based on a quick look, and don’t necessarily need to count creatures and aember control, though I make a sort of mental note of it.

I note that Kelifi is bad and Iron Obilisk is good. I note the synergy between Lomir, Granger Chieftain and Wardrummer.
Effeverescent principle is good aember control, and I note the support cards in: Labwork, Phase Shift, Scrambler Storm, Twin Bolt and Wild Wormhole. All nice.
I note the 2 lifewebs and that they are tricky and don’t usually go off. I love the Lost in the Woods and the two Nocturnal Maneuvers. The Hunting witch is weak with only 3 other creatures.
Deck looks okay. Brobnar is main house, and both Logos and Untamed are support. No real burst and weak aember control.

The Often Laboring Defender of Fogpit

I note the two Loot the Bodies and the Coward’s end. I like that I have a high chance of having Loot the Bodies when the Coward’s end goes off. I also note the Earthshaker, another card that goes well with Loot the Bodies. Not a lot of Aember control.
Mars has two key abductions which is pretty useless. I guess I can key abduction my mars and then play Phospherous Stars to keep my mars unstunned. I like the quality of the mars creatures except Qyxxlyx.
I love the support in Untamed. The Lost in the Woods, Nature’s call, Regrowth, Mimicry and Scout are all good action cards.
Problem is, I might have a hard time keeping board with this deck. Well, I might, but I won’t have a dominant house on the board, but a split of 2/2/1 or something. Board clears help though, if I fall behind on board.
I compare the two decks, I just mostly note that the Brobnar and Untamed in the second deck are way better.

Again Loot the Bodies and Coward’s End, but this time two Coward’s end and one Loot the Bodies, and no Earthshaker. Less exciting. Only 4 creatures in Brobnar. Also warsong is not great, and Unguarded Camp might be hard to pull off with the low creature count.
I dislike Mothership support as it doesn’t work unless you start your turn with some ready Mars stuff. Three Biomatrix Matrix which is just bad. 2 Thinkdrones and Grommid are bad too. This is just one of those Mars lineups that won’t work.
Sanctum has some tools, but it’s not great.
This deck is just not a good deck, and I’m glad it doesn’t come with other two bad decks because I’d have a hard time getting anything out of it. Low creature count and no burst and barely even any utility. I checked afterwards, and this deck has 57 SAS rating on decksofkeyforge.com heh. It’s a reversal deck, basically.

The Often Laboring Defender of Fogpit is the better pick in my opinion. A case can be made for the first deck, but I prefer the second.

Game 1: They open with Nepenthe Seed, I drop a couple of mars creatures, and they proceed to LANS. I drop earthshaker, clearing the 4 Logos creatures they played. I keep Coward’s end thinking it is likely they will replenish their board with the large hand they got, but I mistakenly play Pingle who Annoys, which kind of makes that tactic null.
Luckily, they play Brobnar and clear my Brobnar and their own. A couple of turns later they concede and leave, no explanation.

Game 2: First few turns I maintain board control with brobnar championing a Firespitter, Headhunter, Earthsaker and Gauntlet. I then drop a wide Mars board and hope they don’t have any board clears. I play a few Untamed creatures too, to cycle my hand, and they have no answers. I keep a Key Abduction in my hand in hopes of cutting the game a turn short, and it does.

Game 3: I missclick and mulligan by mistake, a much poorer hand emerges. I open with a Mighty Javelin into a 2/2/2 hand. I soft lock them with Witch of the Eye and Nature’s Call/Lost in the Woods for several turns, getting to my first key. I release the lock a turn late, letting them have a key instead of playing my Grabber Jammer. But I do play a nice 4 creature Mars board after Phosphorous Stars.

They Mimicry my Nature’s call, and try to Key charge, but they left my Grabber Jammer on the board so they fail to forge a key.
This time I discard my Key Abduction as they have developed a Sanctum, board and I don’t see myself keeping my Mars much longer.

I look at the aember they racked up, and I think my only out is Mimicry the key charge. So I reap for 2 with Mars and hope my Niffle Ape Survives. But that’s silly, because if I have 6 aember and they don’t stop me, I get a key anyway. The only case where Mimicry on key charge would help is if they play Miasma. They didn’t have a way to stop me, but I’m still baffled at my thought process here. I mean, it’s still probably the only play though. Right?

I decide to stop here. the deck works. I am able to learn it’s workings fast. The games in Casual are not a good measure of success, but in Competitive I get crushed with my unpracticed sealed decks. I’m happy with my performance for the most part, except that last thought process, and the Pingle earlier.

I definitely think the deck is capable, and could bring me to 5-1 with a little luck. Honestly though, it’s hard to practice for an entirely new set. I hope a lot of cards get spoiled beforehand so I can at least have time to properly assess them.