I’m simply going to open the three most recent decks from the Master Vault, assess the deck, and pick one to play. In Birmingham Vault Tour I will have 10-15 minutes to do so, but it will be with a new set, meaning I’ll spend some time assessing specific cards. So I’m going to assess decks with 2 minutes each, the same amount of time you get to view an opponent’s identity card in Archon format. I will look over the deck, then write down my thoughts from memory. 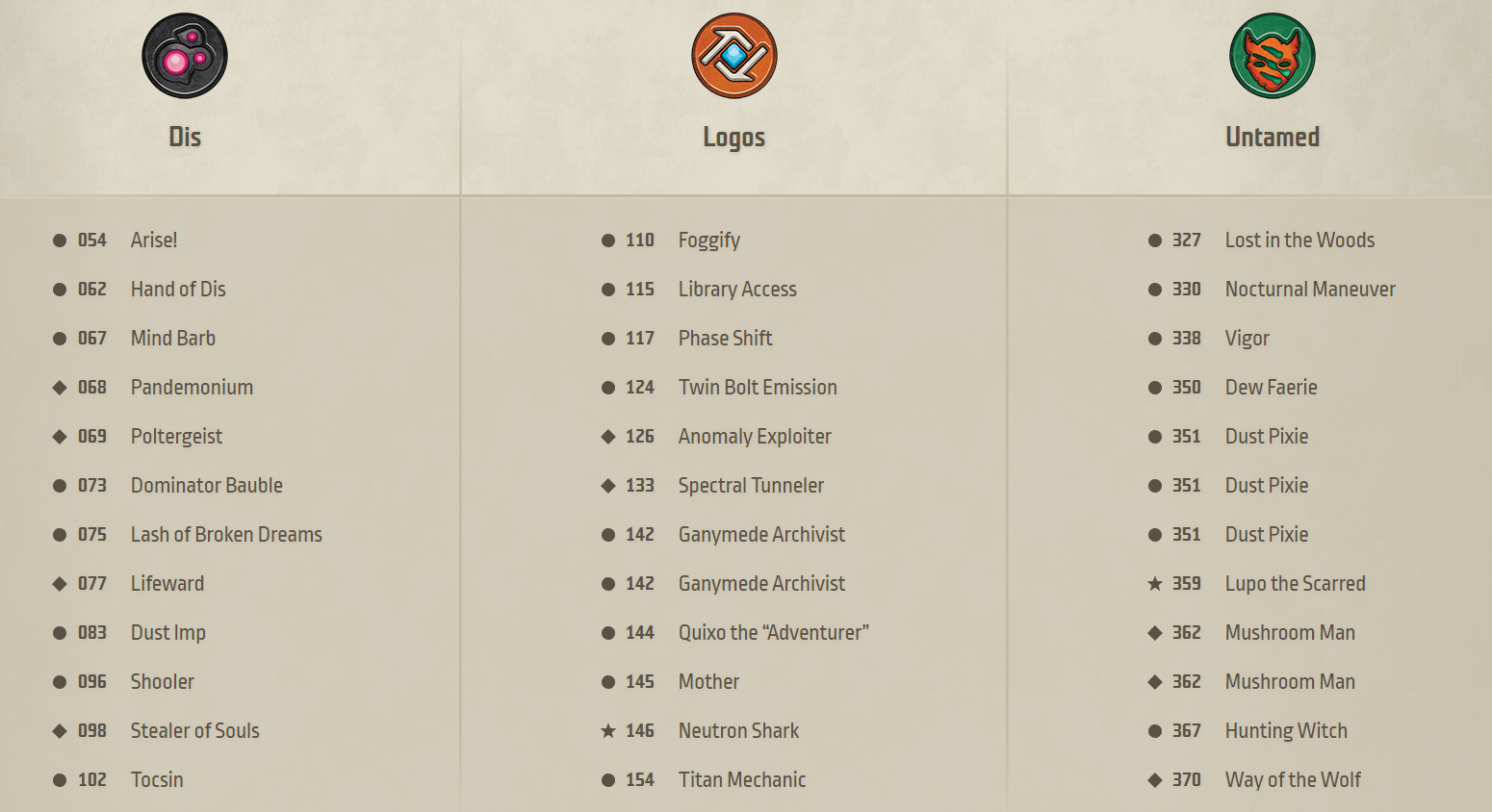 At first glance, I like the house combination and I’m hoping that Dis can be the main house, Untamed the burst, and Logos the support. I first go over the creature counts. I have only 4 creatures in Dis, which is very low. About 6 in Logos, and a whooping 8 in Untamed. While Logos has two Archivists, the deck seems to lack the tools to keep a board and make them survive. It appears as though I am unlikely to keep a board with a big main house and reap repeatedly. Next up I look for aember control, which is extremely light. I have a shooler and a lash on Dis, and… that’s it. I’m going to need to win a race.

Dis has some excellent utility in action cards. I like seeing Lash, Poltergeist, Hand of Dis and Mind Bard. Lifeward is going to be hard to use with no board clears to speak of. It seems like Dis is my support house, I’ll pick it when I need to deal with something, or unload 3-4 cards from my hand. It is unlikely I will have anything to reap with.

Logos has a mediocre library access with a single Phase Shift and no Wild Womholes. It’s very unlikely I’ll be able to draw additional Logos cards from it, so I treat it like a dead card. Mother is always nice to have, but the rest of the creatures are unlikely to survive unless I play Fogify the turn they come into play, and then play Logos again to use them.

Untamed is actually quite excellent with 2 Mushroom Man and Lupo the Scarred they can hold some board. And also have excellent aember burst with 3 dust pixies, 4 aember pips on actions and the upgrade, and a hunting witch with to boot.

The deck’s strength obviously lies in the aember burst in Untamed. there is a possibility Untamed can act as a main house and allow me to go back to it to reap. Logos is the weakest house providing very little of anything exciting. Dis provides nice support with some artifact control and spot removal. The creature distribution is actually nice, with it leaning heavily towards one house.

The lack of aember control is painful, if I get behind in the race, nothing is going to pull me back. I don’t even have a key cheat to make up for lost time. It also lacks removal, only having Twin Bolt Emission, Hand of Dis and Lost in the Woods, and a soft removal in Nocturnal Maneuver.

I feel this deck is about average, and is likely inconsistent. I will have to fight tooth and nail to get 5 wins out of this deck. If my opponent gets better burst, or just a single strong bait and switch after a burst untamed turn, it’s good game. I might even have to hold back aember generation against shadows with this deck, not a fun thing to do. 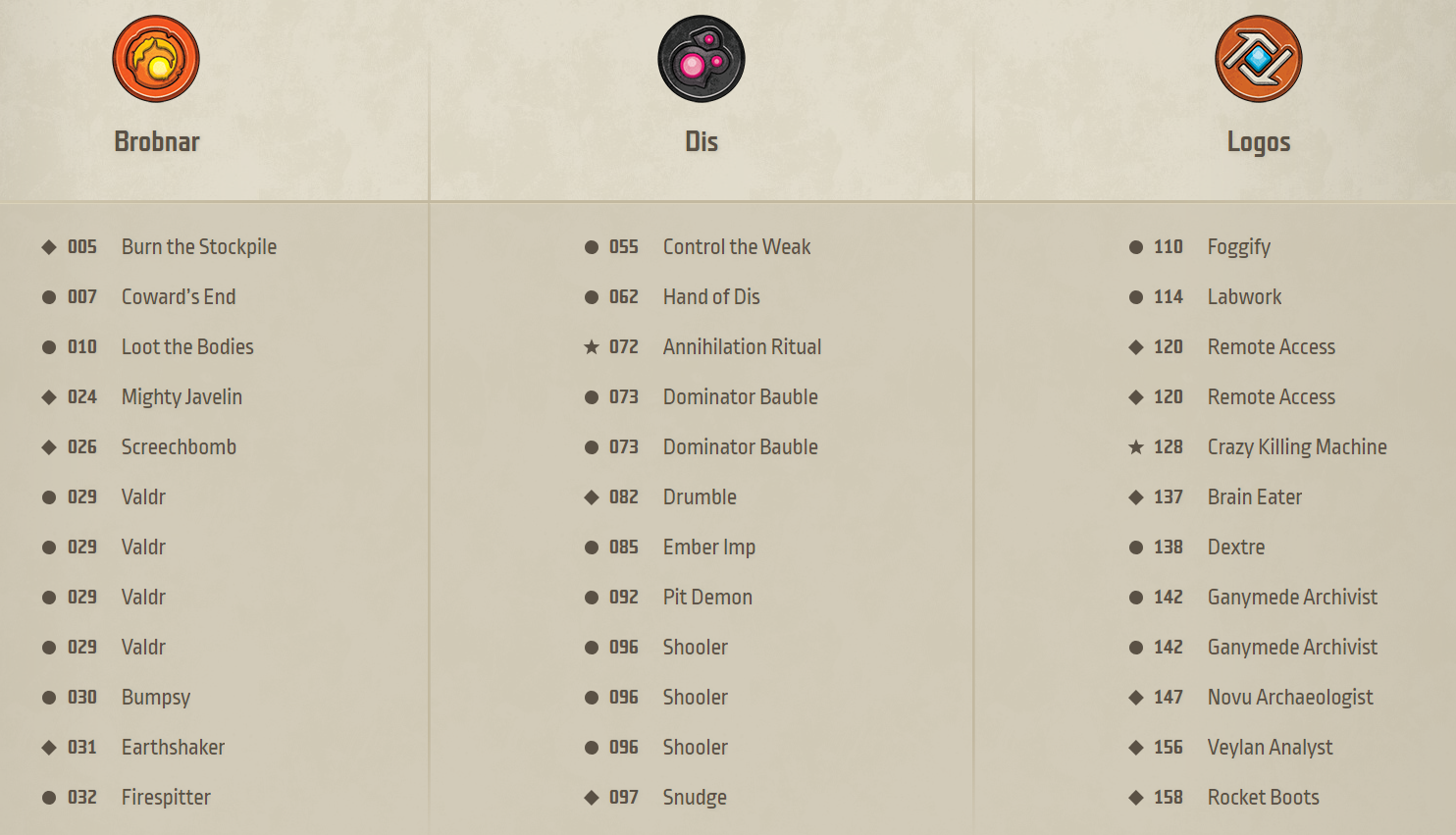 Just looking briefly at this deck I like it far better than Kucor. It has some decent aember control, it has some utility, and it has board clears. The creature compositions is 7,7,6 which is on the high end, which I think is solid for sealed. The balance is not awesome, but the two dominator baubles mean I can pick Dis and have a wider board than the 7 Dis creatures suggest. I’m looking at Dis to be my main house, and both Logos and Brobnar as support.

Dis has an excellent selection of creatures. 3 Shoolers, Ember Imp, Pit Demon, Drumble and a Snudge that’s 4 out of hand aember control and another on the board. I like the possibility of bouncing my Annihilation Chamber with my Snudge to generate an additional aember. Aside from the Annihilation Chamber and the 2 Dominator Baubles I have Hand of Dis and Control the Weak. Hand of Dis is the weakest card here, but still a welcome addition to a high quality house.

Logos has two Remote Access which can certainly surprise some opponents. I hope they can be used on Omni Sacrifice artifacts. It has some archiving which is nice, but I’m not counting on them sticking around. Crazy Killing Machine is, well, crazy. I have never played with it, so I don’t know if I’ll be happy to use it. Other than that, nothing too fancy. Well, Rocket Boots on a Snudge would be the dream.

Brobnar provides a solid board. Some high powered creatures are great to have, but I most excited to see how much control it provides. Burn the Stockpile and Screechbomb are excellent aember control tools, along with a bumpsy could help. And it has two board clears and a spot removal. The Loot the Bodies could definitely generate some aember, especially with Coward’s End, but also Earhtshaker. The only downside is it lacks the ability to attack on the turn they come into play.

Quite a bit of aember control makes me happy. It has board presence and board clears and even a couple of spot removals. There is some utility and even artifact control. I’m pretty happy.

Setting up the Brobnar is not going to feel good because they can’t fight the turn they come into play. Playing a Valdr just doesn’t do much of anything. I’m hoping I can play them while taking care of other needs like aember control and boar clearing.

This deck is far better than the previous one, and I’m happy to pick it if the third isn’t better. I only see about 6 “dead cards” that aren’t likely to do anything. A good place to be in sealed.

Hah, another deck with 3 shoolers, and a beefier selection of creatures in Dis. The creature distribution is pleasing, with 7, 3, 7. I see a general lack of aember control, though quite a bit of board control.

Dis is pretty strong. The creatures are solid, the lifeward and Gateway work well together and there is even Ammonia Clouds to pair with the Lifeward. Compared to the previous deck, I miss my Drumble and Snudge. I thought those two Terrors were Pit Demons. It doesn’t really change much, they are both a beefy body that does a little something extra. It’s a solid house.

Logos doesn’t bring much to the table other than 6 aember pips and a little bit of utility. Honestly, I like Logos less and less each time I see it. At least it has Labwork, Sloppy Labwork and Neuro Syphon, which will help make the Logos turns potentially feel a little better. Library Access again lacks Phase Shifts and Wild Wormholes to be likely to draw into more Logos cards. Spectra Tunneler with just 3 creatures is just… useless.

Mars is pretty solid here. I like the two bombers and two Ulyqs that can hide behind a Dominator and do stuff. The EMP Blast is not a strong card. I could get a lot out of picking Mars repeatedly, and if push comes to shove, clearing the board with Ammonia Clouds can be useful.

Good creature split, decent board clears. Mars is the house I want to keep picking and using, and Logos plays into that by not getting in it’s way.

Not enough aember control is basically a no go. It doesn’t have the aember burst of the first deck, and while it has a little bit more aember control, it is far from enough.

If I had to pick between this deck and the first, I’d go with this. Even though it doesn’t have a lot of aember control, it has a little more and that might make the difference. It has a house I actually like to pick repeatedly and Mars even has a Feeding Pit to help draw while I’m picking it and maybe not playing a lot of cards.

So the clear pick here is Dagen E. Subiblot, the 999th, It has a good mix of everything I need. Do you agree with my pick? Would you pick differently? Have you spotted something I did not? I’d love to hear.

Next up, I’m going to see if I can win 6 games with it on the crucible.